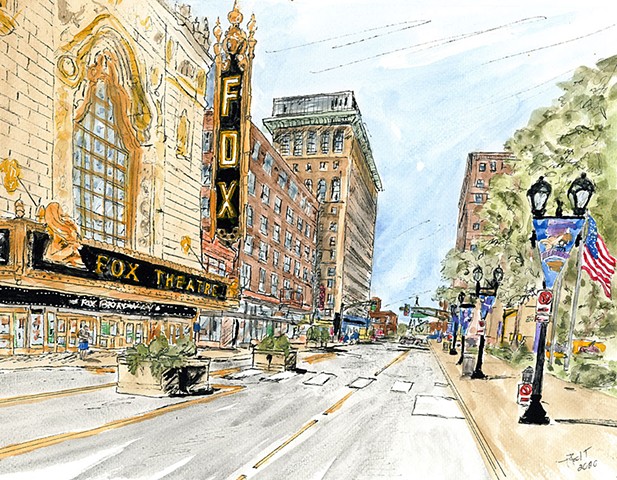 The Fox was built in 1929 by movie pioneer William Fox as a showcase for the films of the Fox Film Corporation and elaborate stage shows. It was one of a group of five spectacular Fox Theatres built by Fox in the late 1920s. (The others were the Fox Theatres in Brooklyn, Atlanta, Detroit, and San Francisco.)

When the theater opened on January 31, 1929, it was reportedly the second-largest theater in the United States, with 5,060 seats.[3] It was one of St. Louis's leading movie theaters through the 1960s and has survived to become a versatile performing arts venue.

The Fox was designed by an architect specializing in theaters, C. Howard Crane, in an eclectic blend of Asian decorative motifs sometimes called Siamese Byzantine. The interior is the architectural twin of another Fox Theatre built in Detroit in 1928. Reporters in 1929 described the Fox Theatres in St. Louis and Detroit as "awe-inspiringly fashioned after Hindoo (sic) Mosques of Old India, bewildering in their richness and dazzling in their appointments ... striking a note that reverberates around the architectural and theatrical worlds."[4] William Fox nicknamed the style the "Eve Leo Style" in tribute to his wife, who decorated the interior with furnishings, paintings and sculpture she had bought on her trips overseas.[3]