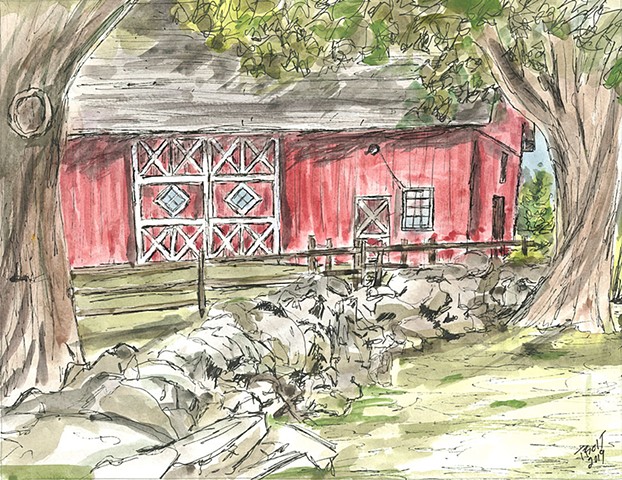 Timeline 1794 Josiah Raymond began buying land in this area, and soon after, he and his son Platt Raymond built two homes on the property and established a farm here. Under Lewis Raymond, son of Platt, the farm encompassed nearly 300 acres. 1799 The large White house (the Raymond-Ambler House) was built by Josiah Raymond and was occupied by the Raymonds and their Ambler descendants until 1999. 1800 Lewis’s daughter, Hannah, married Charles A. Ambler, and they eventually inherited the farm. Their two sons, Charles M. and Lewis Ambler, lived in the two houses until their deaths in the 1930s. The large yellow house at the exit to the Farm was built around 1800, and was occupied by the Raymond and Ambler families until 1937. 1880 The white horse barn was built. 1899 The red hay barn was built by local carpenter George Taylor. 1900 The ice house was built by George Taylor. He also built the back wing on the white house, and remodeled the yellow house, taking out the center chimney and traditional front stairs, and adding the bow windows on north and south. 1918 Charlie M Ambler married Anna Schuessler. 1919 Elizabeth (Betty) Ambler was born to Charlie M and Anna Ambler. 1942 Betty married Reed Shields, the first president of our Wilton Kiwanis Club. 1950 Betty + Reed divorced. He moved to Ridgefield and she went back to live with her mother at the family homestead. 1998 Anna and Betty continued to run the farm until Anna died in 1988 at 95, Betty continued on until she died in 1998 at 79. 1999 The Town of Wilton, with overwhelming taxpayer support, purchased this beautiful 200-year-old working farm.